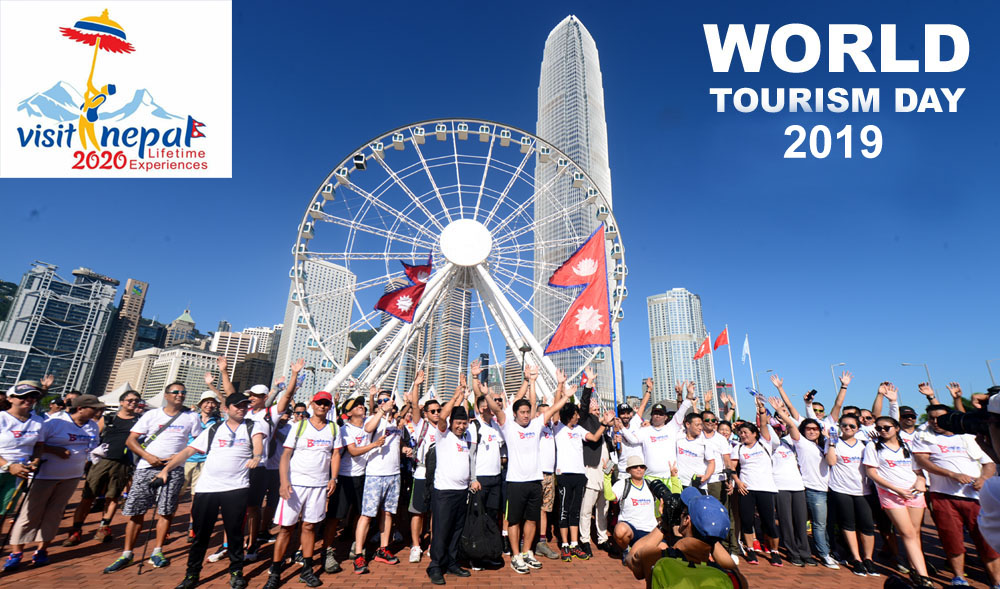 World Tourism Day, celebrated every 27 September around the world, is a unique opportunity to raise awareness on tourism’s actual and potential contribution to sustainable development.

“Atithi Dewo Bhawa”, in Sanskrit, literally means Guest is God. This adage expresses Nepali cultural character since the time immemorial. This reflects age-long cultural characteristics of the Nepali civilization that derived its linguistic, religious and socio-cultural features from Sanskrit.

Here are some major Tourist Places, Religious Sites, and Tourism Activities in Nepal. Please share the tourist activities, places etc. of your country too. 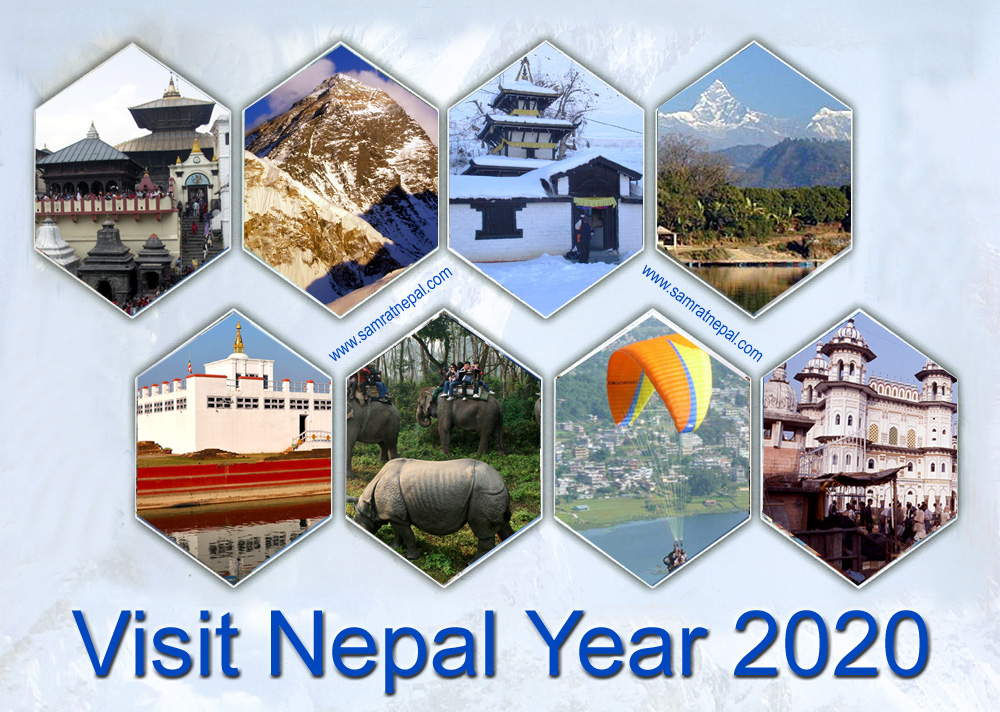 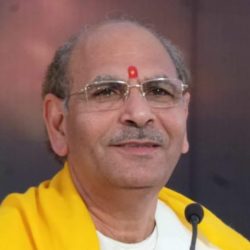 Kailash Helicopter Services started by youth entrepreneurs, have imported a new helicopter. The company imported a helicopter from French aircraft manufacturer Airbus, of the model S 350 B3 Series. The 300 million company intends to import another helicopter in the near future. 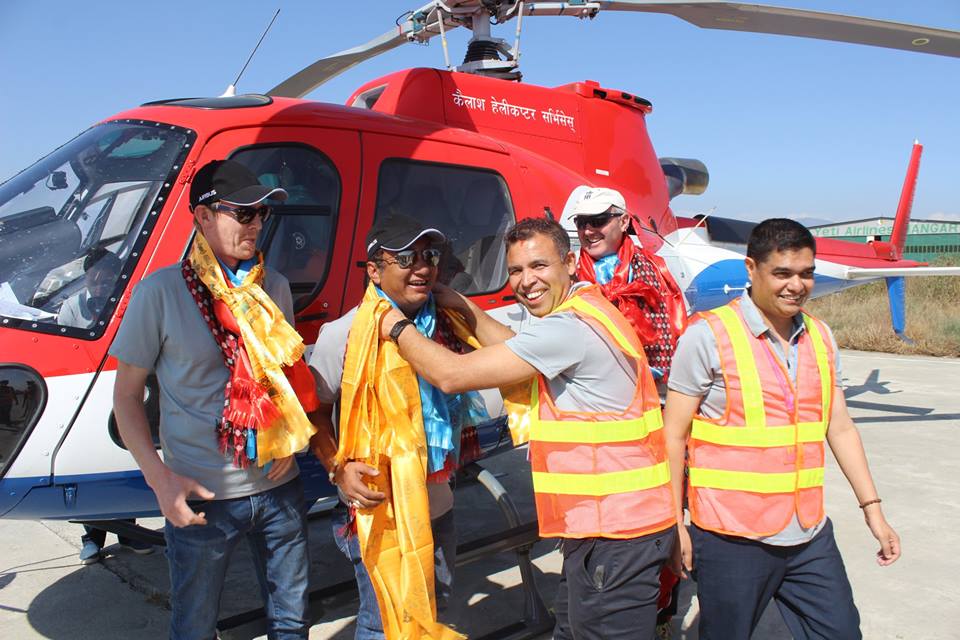 The helicopter came in from Singapore on Saturday. The process to obtain AOC flight permission for the helicopter has already started, informed the Managing Director, Pratap Jung Pandey. 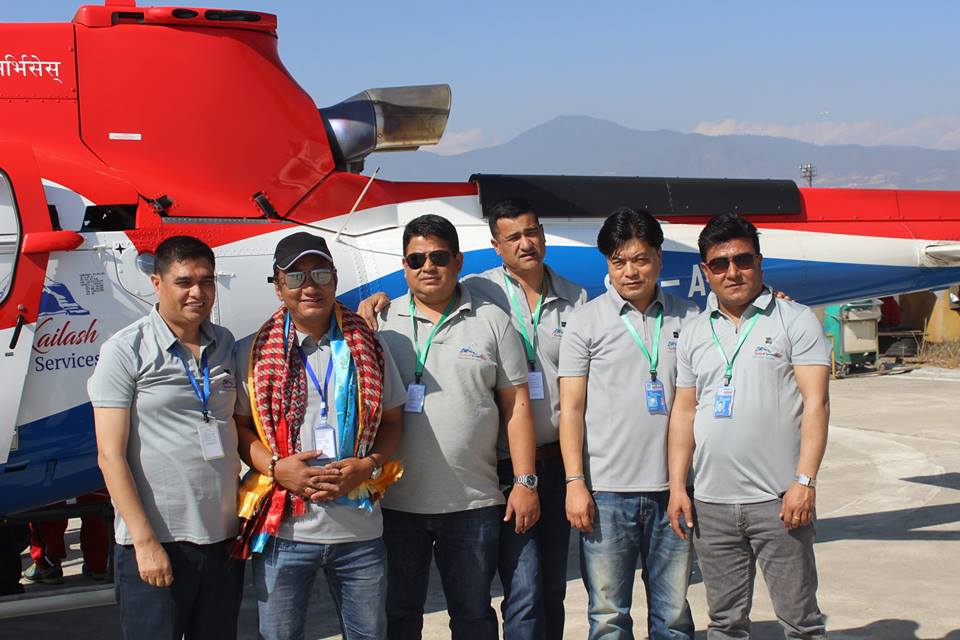 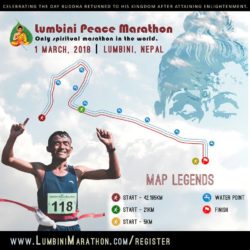 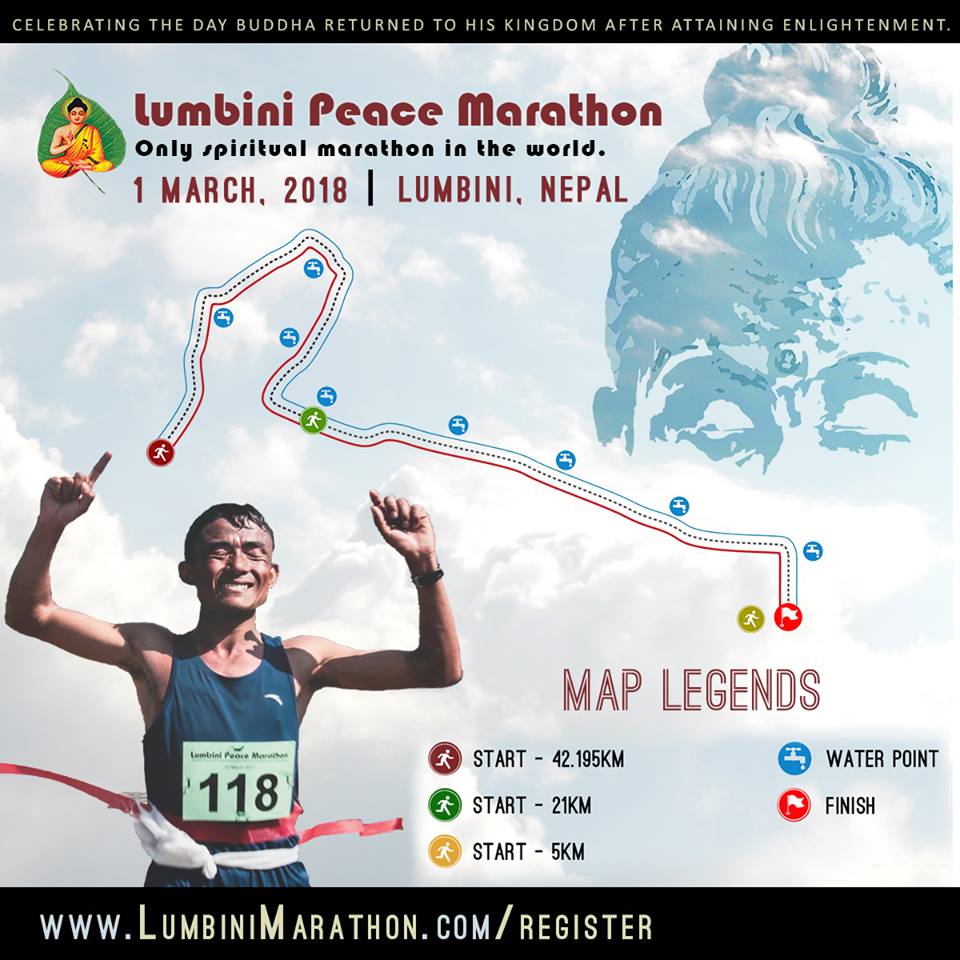 The Lumbini Peace Marathon is going to be held on March 1 in Lumbini. Organizers claim that 250 people from indigenous and foreign background are participating in the competition. Players from Nepal, India, China, Australia, Korea, and Britain will participate in the competition. President of Lumbini Peace Marathon Mr. Vikram Pandey informed that the Lumbini Peace Marathon competition has been organized on Falgun Purnima because this is the day when Lord Gautam Buddha returned to his birthplace after getting enlightened. There are three categories including full marathon (42-198km), and half marathon of 21 km and 7 km. The winner of full marathon will be awarded a medal and 100 thousand cash prize and given an award named as ‘Lumbini Ashok Peace Puraskar’. Similarly, the first runner-up and second runner-up will be awarded with 45,000 and 70,000 respectively. The prize for the second place is named as ‘Kapilvastu Huyen San Puraskar’ and the third place prize is named as ‘Mayadevi Garden Ulthan Puraskar’. Similarly, the winner, first runner-up and second runner-up of half Marathon will be awarded with the cash prize of Rs 50 thousand, 35 thousand and 25 thousand respectively. The marathon will start from Kudan to Gotehawa, Kapilvastu,banganga, Tilaurakot, Niglihawa, Arorkot, Dohani and will finally end in Lumbini. Source: Tourismmail Landmark Forest Landmark Pokhara Creative Adventure Nepal Landmark Kathmandu Contact Us: E-mail:sales@samratnepal.com Phone: +977 – 9851030564 Location: Gairidhara, Kathmandu, Nepal. Website:www.samratnepal.com 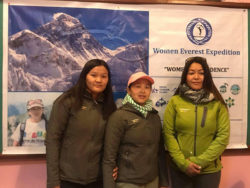 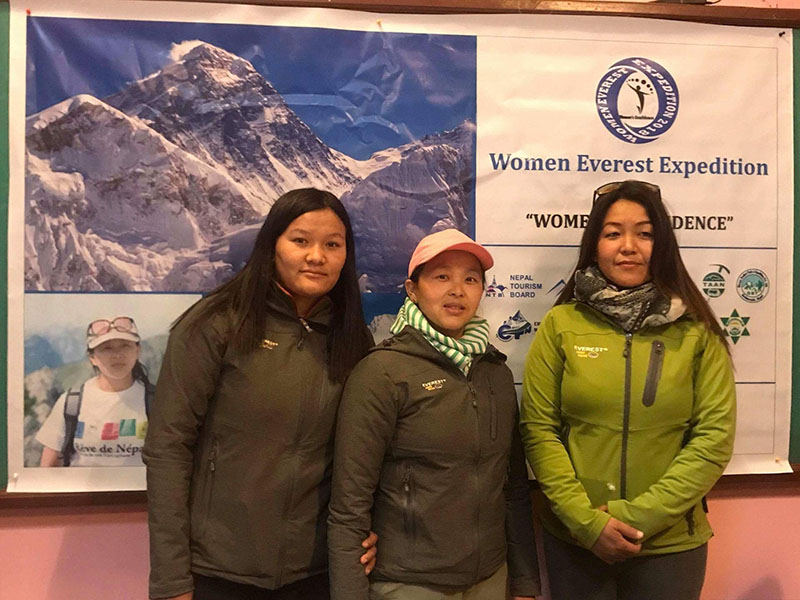 An expedition team of three women climbers – led by Lakpa Yangjee Sherpa, along with Yangdi Sherpa and Pashang Lhamu Sherpa – to climb Mount Everest this spring.

Three women mountaineers are set to scale the world’s highest peak Mount Everest this spring with the aim of promoting tourism and increasing women’s participation in the tourism and mountaineering sector of the country.A press conference organised by Tourism Journalist Association on Friday shared that an expedition team of three women climbers – led by Lakpa Yangjee Sherpa, along with Yangdi Sherpa and Pashang Lhamu Sherpa – is climbing the highest summit with the slogan of ‘Mountaineering for Women’s Self-reliance’.

On the occasion, Lakpa Yangjee said they would start ascending the Everest from April 7 and have targeted to reach the summit on May 18 if the weather conditions are supportive. 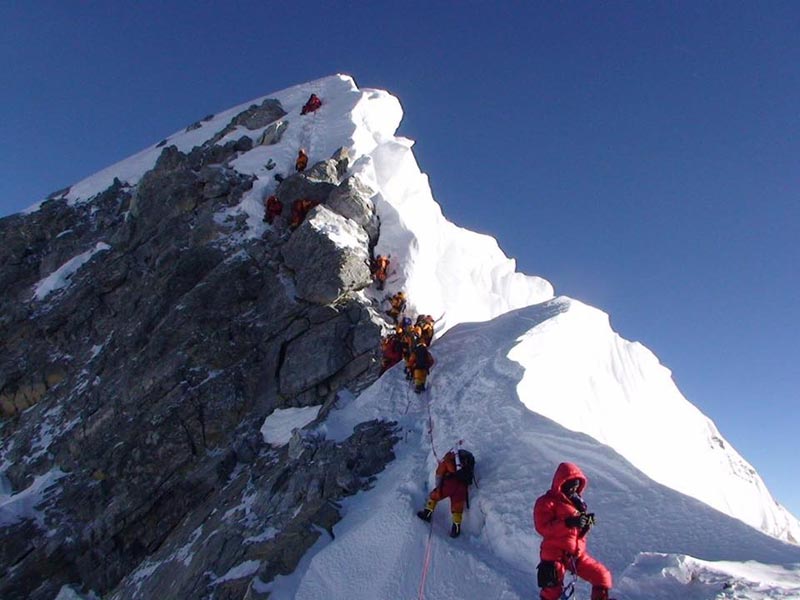 She shared that another important reason behind carrying out this expedition is to provide financial support to Dalit, single, and oppressed women who have returned home from foreign employment, along with attracting them toward tourism sector for income generation that would ultimately make them self-reliant.

Everest Hardware is providing necessary logistic support to the women mountaineering team who is climbing the highest peak through Ascent Himalayan Trek and Expedition Company.

The mountaineers hailing from Solukhumbu have been working in the field of mountaineering and tourism for a considerable amount of time.

In conjunction with the Embassy of Nepal in Beijing and Nepal Tourism Board (NTB), Nepal Association of Tour and Travel Agents (NATTA) is organizing Nepal China Sales Mission 2017 in four different cities of China: Chengdu, Guangzhou, Hangzhou and Beijing from 07th June through 17th June 2017. 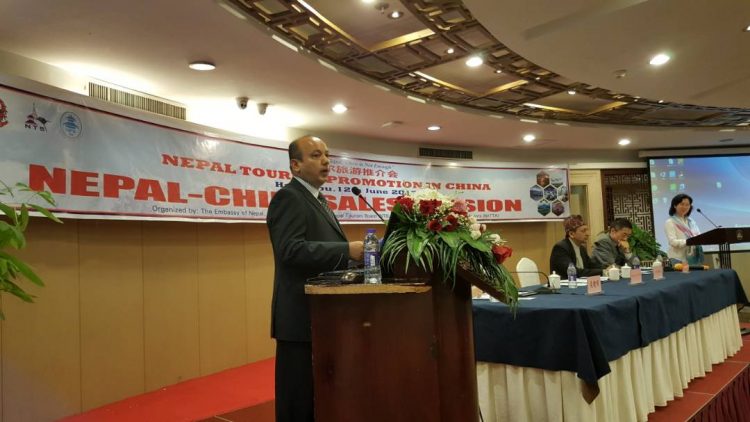 NATTA’s Promotion in China Ends Nepal Association of Tour & Travel Agents (NATTA) has finally blown the bugle of Nepal Promotion in China in Beijing on 14th June afternoon at Hotel Sun World in the gracious presence of chief guest HE Ambassador of Nepal for PR China Leelamani Poudyal, special guest General Secretary of China Chamber of Tourism Xu Lejiang, and high level officials and about sixty-five Chinese tour operators and media representatives and local tourism dignitaries. The program began with welcome address by Nepal’s Ambassador and audio-visual presentations on Nepal’s tourism attractions which seem to have lured the Chinese tour operators a lot. Nepal Tourism Board also presented a short narrative on Nepal Tourism and that was followed by show of Documentaries on Nepal’s cultural and natural heritages. Then the floor was declared open for queries from the Chinese operators and media, the queries from the Chinese side reflected their great interest in planning visit to Nepal with friends and families in the near future. President NATTA Madhu Sudan Acharya answered all the queries raised and gave his concluding remarks. The B2B session that followed was quite lively and all the Nepalese travel trade entrepreneurs were attended personally by the Chinese operators. They collected various information as to how the potential travelers to Nepal could make their trip relatively   easier and comfortable. 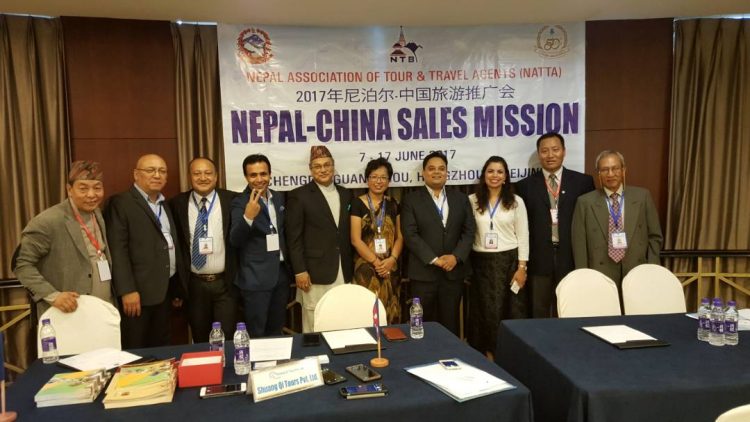 Speaking on the occasion Ambassador Poudyal stressed on the fact that Nepal and China were closely connected geographically as well as culturally. He further said, Nepal-China relationships are based on the five principles of peaceful co-existence. Nepal has great expectations for a socio-economic transformation from China’s initiation of OBOR already signed by Nepal, he added. He also hinted on the importance of Lumbini for Chinese Buddhists as it is the Birthplace of Shakyamuni Buddha. Ambassador Poudyal gave eight reasons why Chinese citizens should travel to Nepal. Xu Lejiang, general secretary of China Chamber of Tourism committed to support Nepal in its efforts to gain more of Chinese tourists in Nepal. He also said that soon CCT and NATTA will be jointly introducing strategies to promote Nepal in China. 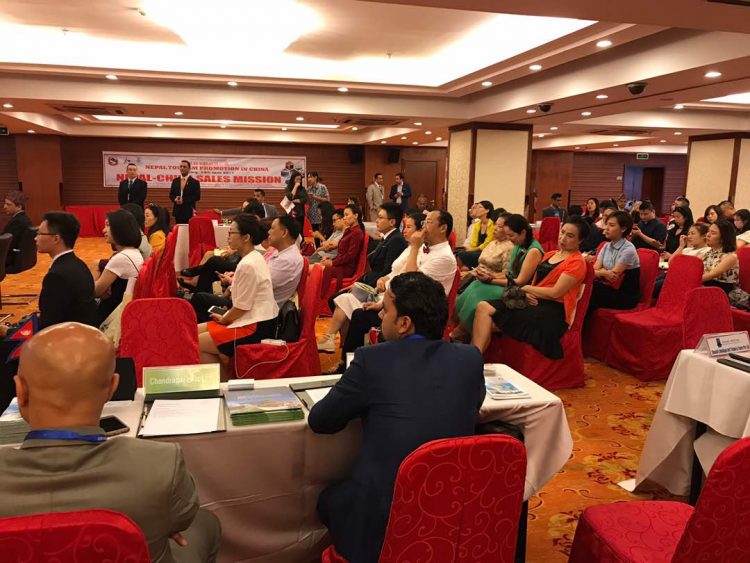 NATTA President Acharya underscored the importance of tourism not only as a business but also as a bridge to bring the people of both the countries to a close proximity. Acharya referred to the challenges confronted by tourism industry of Nepal in the recent past and the measures adopted to eliminate those challenges by way of raising the image of the country as a most coveted destination among the people of the region and globally as well. He also pointed out about the second International airport in offing and the addition of new aircrafts for Nepal Airlines which will be operating to China. Tourism to-day is looked at as an industry of national priority, he added. 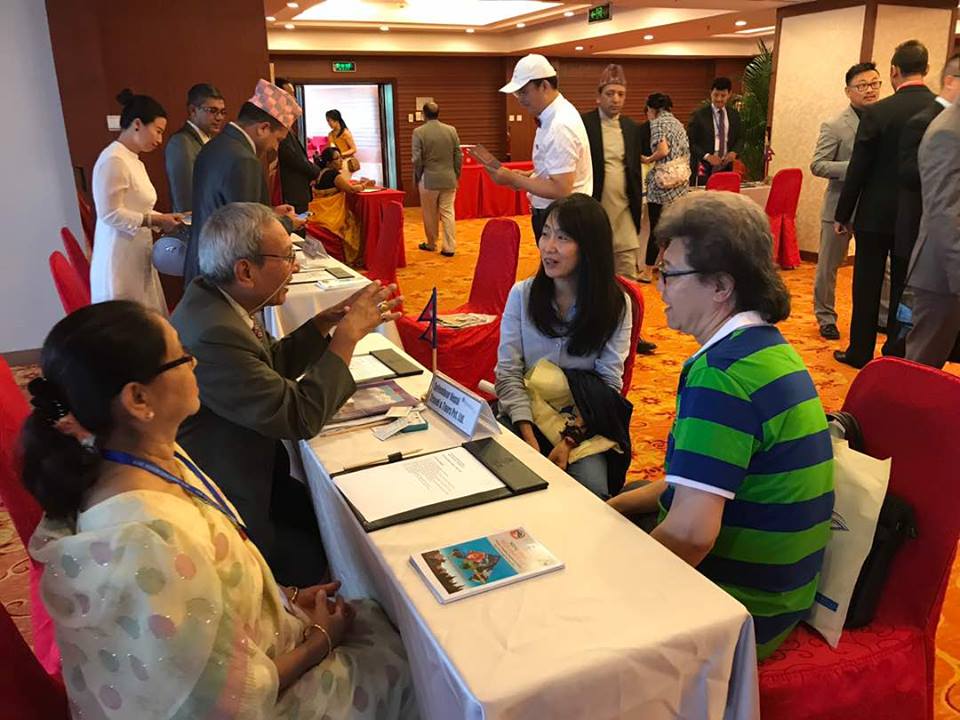